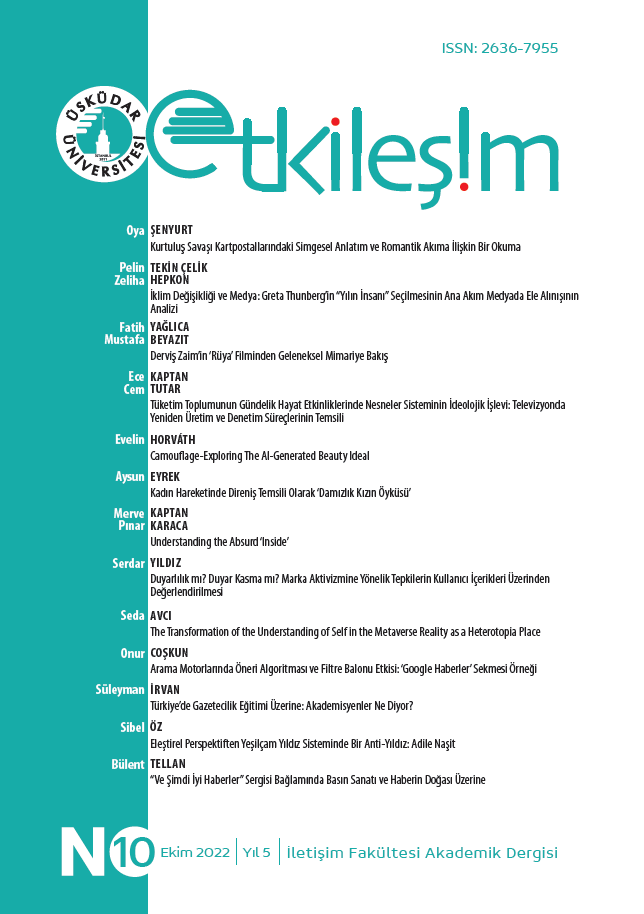 Below are the paper submission rules of Etkileşim Üsküdar University Faculty of Communication Academic Journal:
• Page set up: 2,5 cm from top, bottom, both left and right. In text line spacing should be 1.5. In references, line spacing should be single.
• Page numbers should be placed at the bottom on the right.
• The main language of the journal is Turkish, contributions in English are also accepted. Revisions regarding to principles may be made by editors/co-editors. Revisions regarding language use, punctuation and abbreviations will be based on the most recent edition of the spelling guide of Turkish Language Institution.
• For Turkish written manuscripts, there should be an English Abstract followed by the Turkish Abstract before the introduction part. For English written manuscripts, there should be a Turkish Abstract followed by English Abstract before the introduction part.
• Maximum length of the manuscripts should be 30 pages including the abstracts and references.
• Abstracts, both in Turkish and English, should be no longer than 300 words including the main title in English and Turkish and five keywords.
• Title of the article or a clear short version of the title should be indicated in the e-mail which is sent to the editor with article attached.
• The article title should be 14 point bold, centered and all in upper-case. The subtitles should be left-aligned, 12 point, bold and title case (with first letter of each word in upper-case).
• Name and surname of the author(s) should be placed under the main title, centered, and surname written in capitals. After surname, superscripted asterisk (*) should be placed and information regarding the author/authors’ institutions, contact information and Orcid numbers must be written in Times New Roman 10 point and single line space that should be seen only in the first page of the article, justified in footer.
• Abstract heading should be title case, left-aligned, 12 point and bold. Abstracts and Key Words should be 11 point and 1.5 line spaced.
• Text should be justified, written in Times New Roman 12 points, 1,5 line spacing. New paragraphs should be 1,25” left indented. There should be a single space before the titles within the text.
• Expressions in the text, such as newspapers, books, magazines, artworks, computer games, mobile applications and brand names should be written in italic.
• Footnotes should be justified, written in Times New Roman 10 points, single line spacing. Text should start with a space after the footnote.
• References should be 11 point with single spacing. If the information is longer than a line, the next line(s) should start with 1,25 indent. In cases where more than one work of the same author is used, a straight line is used instead of the author's name in repetitions after the first work.
• In accordance with COPE principles and academic study criteria, ethics committee approval should be obtained depending on the field of study and should be stated in detail in the study.
• In order to evaluate the studies, the level of similarity should be less than 25% in Turnitin / Ithenticate plagiarism report. Studies with similarity rates above 25% will not be considered.

-Referencing Rules
• In Üsküdar University Faculty of Communication Academic Journal Etkileşim, the only referencing method that can be used is referencing within the main text method, that is to say APA 7.0 (American Psychological Association).
• Therefore, references should be mentioned within the main text by indicating author’s surname, publication date and page number cited within parenthesis (Tarhan, 2006, p. 125).
• Extra explanations regarding the main text and other remarks should be given in footnotes. These notes should be numbered within the text as 1, 2, 3 and should be given at the end of the page with respective order and corresponding remarks.
• The footnotes for the remarks that are given at the end of the page should also be referred with referencing within the main text method, (APA).
• When quoting in the paper, if a direct quote is less than 40 words, incorporate it into your text and use quotation marks. If a direct quote is more than 40 words, make the quotation a free-standing indented block of text and do not use quotation marks. The quotation should be 10 point and single spaced.
• If the author’s name is given in the main text, only the publication year and page number should be given within parenthesis. (2006, p. 25).
• If there are two co-authors, both authors’ surname should be mentioned: (Couldry & Mejias, 2019, p. 19). If there are more than two co-authors, “et. al” should be included (Alemdar et al., 2004, p. 28).
• If multiple references are made for the same subject, resources should be separated by semicolon (Geray, 2005, p. 31; Moran, 2006, p. 37).
• Consecutive pages should be referenced as (Baudrillard, 2004, p. 20, 38 and 52). Non-consecutive pages should be referenced as (Bauman, 2012, pp. 20-24, 48-56).
• If different studies by the same author are given in the same parenthesis, citations are placed with dates in chronological order. The authors’ surnames are given once; for each subsequent work, only the date should be given (Güngör, 1989, 2008, 2011).
• If multiple publications with same author and same publication year will be referenced, these publications should be differentiated by adding a, b, c, etc to the publication year, (McQuail, 1987a, p. 55) (McQuail, 1987b, p. 40).
• If the author is unknown or not mentioned, first words of the study is used in parenthesis. It should be in italic and the date should be mentioned afterwards.
• It is essential to reach primary sources, however, if cannot be reached due to some hardships, the source cited should be mentioned. E.g. (Güngör, 1997, p. 21 as cited in Storey, 2016, p. 297).
• In electronic sources with no author, source’s domain name and publication date should be specified. The name of the cited source should be in italic. The URL will be given only in the references. E.g. (Radikal, 2016, March 23).
• References to messages in social media accounts must specify the name of the writer and the year in which the message was written. For instance: (Gates, 2013).
• In cases where organizations (groups) are referred to in the text, abbreviations are shown with square brackets [ ] next to the full names of the organizations in the first citation, then abbreviations are used (American Psychological Association [APA], 2017).
• Archive documents such as State Archives of the Prime Ministry, Ottoman State Archives referred within the text should be specified as (BCA. 30.10 / 1.2.12) or (BOA. DH-SYS. 65/7).
• Referencing translated works, name of the author is essential, (Fiske, 1996, p. 25). Translator’s name is specified in the references.
• If cited from an edited book, author’s name of the article should be specified. Full identity of the edited book including the article should be presented in the references.
• Attachments (documents), shall be presented at the end of the text and down below should be a brief information as to the content of the document and proper citation in line with the relevant criteria. Other attachments (Table, Figure, Graphs) will be presented as Additional Table:1, Additional Graph:1 and Additional Figure:3 after the references.
• Figures, graphs and maps within the text should be titled right under and cited source should be given according to APA rules.

-Organizing References
• The list of references should only include the resources, which were referred in the article.
• According to the APA 7.0 rules, references should be sorted alphabetically by the surname of the first authors of the sources.
• If there exists more than one work of an author with the same date in the references, expressions “a, b, c” should be used to distinguish them from each other and this should be adhered to in the references in the text and in the references section.
• The latest version of APA is taken into account for the works that are not included in the citation formats specified below.

Newspaper Article with Author
Laughland, O. (2018, May 7). Fate of Iran nuclear deal at stake as UK foreign secretary heads to Washington. The Guardian.

Citing Social Media
Jenkins, H. [@henryjenkins]. (2021, November 9). I am pleased to announce that I have been able to reclaim my Twitter account from a hostile takeover by hackers. We've lost some folks, but I delighted to be back. Did you miss me? [Tweet]. Twitter. Retrieved December 28, 2021 from https://twitter.com/henryjenkins/status/1457820360766750721?cxt=HHwWgoCs3Z35m7soAAAA